Steve Hanke's life was saved by an accidental diagnosis. 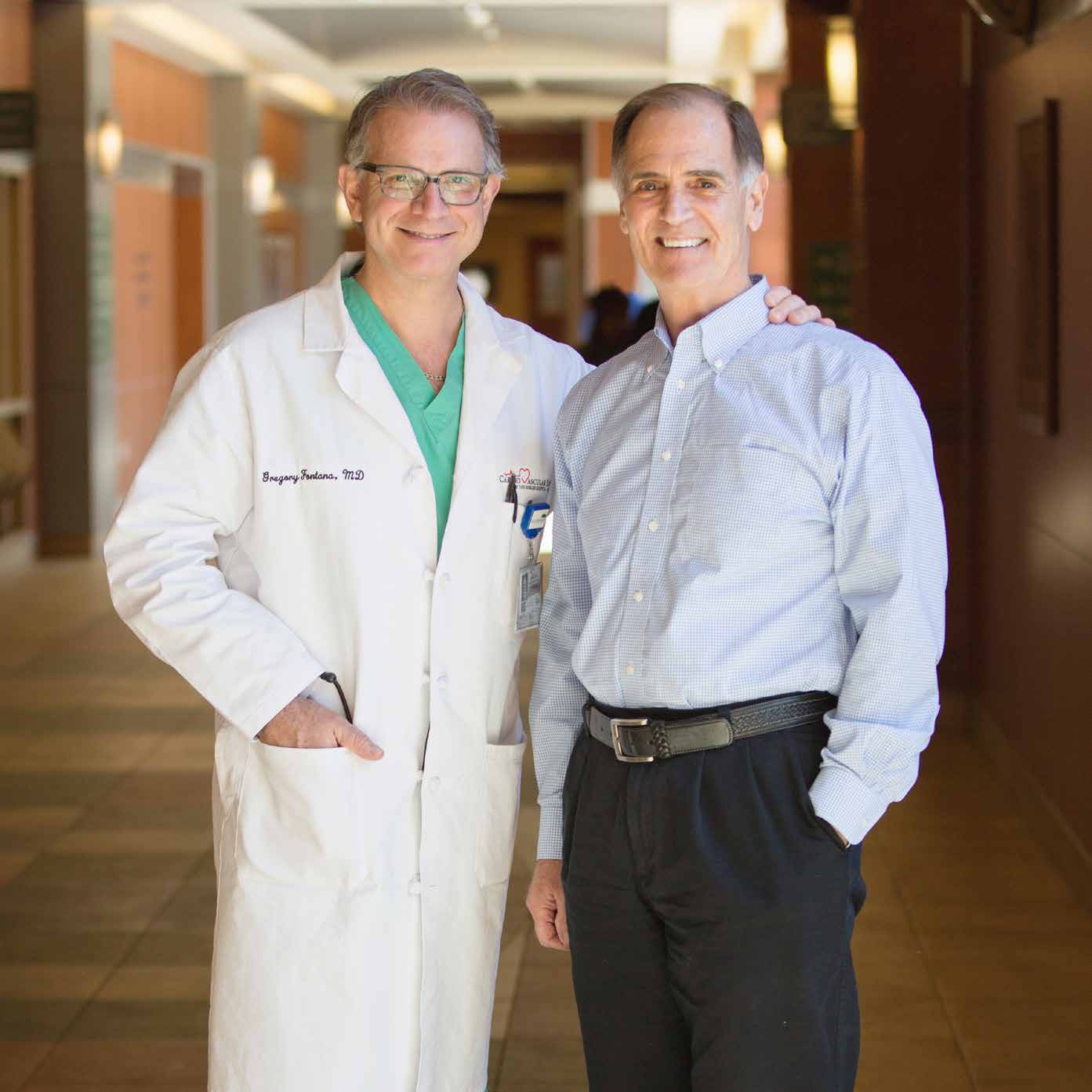 Steve Hanke, 67, a retired educator and school superintendent in Ventura County, was on vacation last summer in Chicago when he began to feel unwell. His heart fluttered in his chest, his left arm started to tingle, and he felt lightheaded— all possible symptoms of a heart attack or other serious cardiovascular problems. Hanke flagged a bellman at his hotel and asked for directions to the nearest hospital.

At the ER, Hanke underwent a battery of cardiac tests, all of which proved negative for heart attack. As a precaution, doctors performed a CT scan to rule out a pulmonary embolism— a dangerous blood clot in the lungs that can sometimes follow air travel. While there were no clots, the scan turned up something even more ominous: an aortic aneurysm.

An aneurysm is a weakening in the wall of an artery, which causes it to “balloon” or expand in size. Often symptomless, aortic aneurysms can grow undetected until the problem becomes life-threatening. Hanke’s aneurysm was so large that it extended into his heart’s aortic root, where this part of the heart arches and turns a corner.

The accidental finding was not entirely surprising. Decades ago Hanke’s father died from a dissected aortic aneurysm when a tear inside the aorta caused blood to leak between the layers of the aortic wall, pushing them apart. The condition is often fatal.

The size of Hanke’s aneurysm made that scenario more imminent. “The doctor said it was not an emergency, but it was urgent,” he says. “I needed to take care of it right away.” Despite the dire news, however, he saw his condition’s detection as a blessing. “These are silent killers,” he says. “This discovery saved my life.”

Hanke returned to California and, within days, sought out the Regional Heart Center—a cardiology practice in Thousand Oaks—where doctors conducted additional tests on his heart, confirming the diagnosis. The next challenge was selecting a hospital to do the complex surgery required. “I was researching UCLA, the Cleveland Clinic and other institutions,” Hanke says.

Regional Heart Center doctors introduced him to Dr. Greg P. Fontana, an internationally recognized leader in cardiothoracic surgery who had recently been hired to head the Cardiovascular Institute at Los Robles Hospital & Medical Center. "He said 'You have a 99% chance of surviving the surgery, but if you don't have the surgery you have a 100% chance of something really bad happening to you,'" Hanke says. “That clenched it. I asked him to be my lead surgeon.”

Formerly the chair of the department of cardiothoracic surgery at Lenox Hill Hospital in New York City and vice chairman of surgery at Cedars Sinai Medical Center’s Heart Institute in Los Angeles, Dr. Fontana is a pioneer and principal investigator in minimally invasive cardiac procedures, such as transcatheter aortic valve replacement (TAVR). He specializes in non-sternotomy heart procedures, which don’t involve cutting through the sternum as many open-heart procedures do. This type of surgery is less painful and involves a shorter recovery time, among other advantages.

“People return to their activity earlier,” Dr. Fontana says. “If patients are older and frail, metabolic demands are easier if they don’t have a big bone incision. And cosmetic considerations make it appropriate for young people.”

With one of the first so-called STEMI programs in the area, the hospital has streamlined the care of patients having heart attacks. Emergency medical personnel conduct EKGs of patients in the field, which—if positive for heart attack—automatically activate a heart team at the hospital’s catheter lab, where blockages in the arteries are cleared and blood flow to the heart is restored.

“It tightens up the time a patient is first reached to the time they receive life-saving treatment,” Dr. Fontana says. “As a result, we have some of the best outcomes in the country. 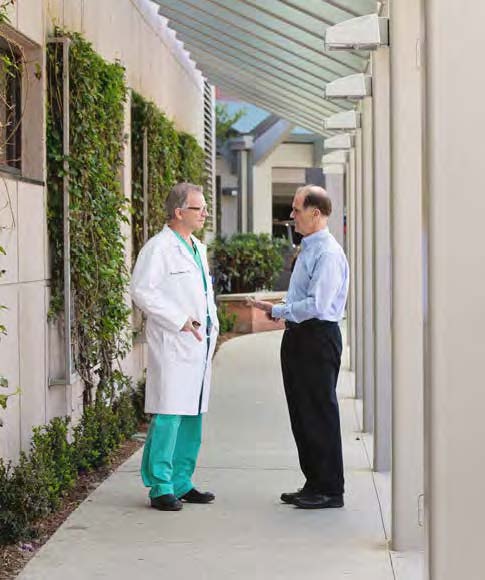 Los Robles is also the only regional referral center for cardiac surgery. “We’re bringing a new depth and breadth to these services and creating a new program with clinical research and lots of new procedures,” says Dr. Fontana.

Just two weeks after his emergency room visit, Hanke was admitted to Los Robles for his own operation. “Within just a few days, his aneurysm had grown to 6 centimeters, well past the threshold of risk,” Dr. Fontana says. “On top of that, the aortic valve was leaking. Patients with such aneurysms tend to have aortic dissection. That’s what killed Alan Thicke and John Ritter.”

The surgery Dr. Fontana planned— aortic valve replacement and hemiarch root replacement—involved replacing a section of the aorta with an artificial graft and the aortic valve with a metal or tissue valve. The procedure required putting Hanke briefly onto cardio-pulmonary bypass equipment, stopping his circulation and cooling his body to allow more time for surgery without risking brain damage. Hanke’s aortic valve, as it turned out, did not have to be replaced, but it did require repair.

Several hours after the operation began, Hanke was wheeled out of the OR. He was in the hospital for five days, and he remembers the nursing and other support staff being particularly responsive to his needs. “They did all the right things,” he says. “I received top-ofthe-line treatment.”

THE LONG ROAD TO RECOVERY

After his discharge, Hanke began the slow process of healing. “You anticipate that you will be up and running in a couple of weeks, but that’s not true,” he says. “In the first few weeks you feel like you’ve been hit by a truck. I didn’t really start moving until cardiac rehabilitation.”

A medically supervised program of exercise, education and counseling on stress reduction, cardiac rehabilitation is designed to help improve cardiovascular health after heart surgery or other cardiovascular event and can make an enormous difference in a patient’s outcome.

Hanke admits he has had setbacks in the healing process. “But I have had excellent care and I feel very fortunate,” he says. “If you are looking for people who are responsive, skilled and experienced, Los Robles is a terrific choice. I couldn’t be more pleased with the care that was given to me.”

And Hanke’s experience had one priceless silver lining. Through it, he learned that his condition is familial. As a result, his brother has had his heart scanned, revealing that he too has a dangerous aneurysm. He will undergo surgery soon. “I’m especially grateful,” Hanke says. “Not only was I saved, but my brother has been saved too."

While Steve Hanke’s aortic valve was able to be repaired rather than replaced, many patients do need a new valve. But the good news is that Los Robles Hospital & Medical Center offers transcatheter aortic valve replacement (TAVR) and is the only hospital in the area that does. This is a minimally invasive procedure to treat aortic stenosis, when aortic valves become narrowed and stiff with age. More than 1.5 million people in the U.S.—about 5% of people over age 75—suffer from aortic stenosis, which causes chest pain, shortness of breath, fatigue and fainting.

Traditional stenosis surgery requires cracking open a patient’s sternum and putting them on a heart-lung machine while surgeons replace the faulty valve with an artificial one. TAVR involves repairing a damaged valve without removing it and is ideal for older, frailer patients who cannot tolerate the more invasive approach.

To perform the procedure, surgeons thread a collapsible replacement valve via a catheter through a blood vessel in the groin or chest into the old valve, similar to placing a stent in an artery. When the new valve is expanded, the old valve collapses and the new valve takes over the job of regulating blood flow.

In addition to experiencing less pain, patients having TAVR have less down time and enjoy an easier recovery than patients getting the traditional surgery. The average patient goes home after a two-day hospital stay.

Aneurysms can be hereditary. If this runs in your family, talk to your doctor.